January 29 - February 5, 2011
We left Banderas Bay (Paradise Village Marina in Nuevo Vallarta) for the passage to Costalegre on January 29, 2011.  Costalegre, or Happy Coast, is that stretch of the Mexican Pacific coast from Cabo Corrientes, or Cape of Currents, the southernmost point of Banderas Bay, to Manzanillo.  There is a small anchorage just south of Cabo Corrientes in the lee of Punta Ipala at Caleta Tehuamixtle, but the protection there is marginal and the attractions of the anchorage minimal, so we opted for the longer hop from Banderas Bay to Bahia Chamela, an overnight run of just over 100 nautical miles.  We timed our late afternoon departure so as to arrive in Chamela early the next morning, January 30, at around 9:00 am.

There was quite a “fleet” heading south with us that night – at least four other sailboats, and a 55 foot Nordhaven powerboat, Eliana (whom we had met last November up in the Sea of Cortez at Isla Espiritu Santu) – all of whom were in VHF radio contact with each other as well as with the northbound traffic, which included several sailboats and two oil tankers.  Again, thank goodness for AIS, which helped us identify and communicate with the tankers, so we could all stay out of each others’ way!  As the sign on our companionway stairs always reminds us: “A collision at sea can ruin your entire day.”

We arrived at Bahia Chamela soon after sunup as planned, to find a really pleasant anchorage at the north end of the bay, tucked in behind the protection of Punta Perula and off the beach in front of the small town of Perula.  The anchorage is quite large and can accommodate many boats, and there were at least two dozen there when arrived.  We anchored in close to the beach near the half dozen or so beachside palapa restaurants with their brightly colored beach umbrellas and tables and chairs in the sand – a common sight in Mexico – which brings the promise of cold cerveza and fresh seafood!  We were also close to the recommended dinghy landing site – where the surf is most benign! For those who would like to see where we were on Goggle Earth, our location (latitude & longitude) was 19° 35.1' N, 105° 07.9' W. 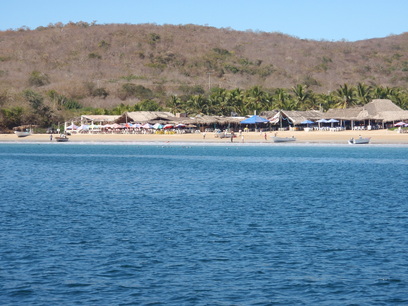 Beachside palapa restaurants in Perula, Bahia Chamela
We spent our first day in Bahia Chamela just relaxing on the boat, doing some cleaning and other chores, and making the aft cabin guest-ready (read that as “taking some of the stuff out of the garage” – our term for the cabin used to store “stuff” – and moving it elsewhere).  The next afternoon we were indeed expecting to have a guest aboard!  Our good friend Steve McGuire, a fellow Attorney General’s Office retiree, sailor, and Olympia Yacht Club member, was planning to take a taxi from Melaque to Perula to join us for the rest of the trip down the coast to Bahia de Navidad.  Melaque, a town on Bahia de Navidad just up the beach a few miles from Barra de Navidad (where we were headed to anchor in Barra Lagoon) is where Steve and his wife Patty have spent several weeks each of the past several years escaping the Pacific NW winter weather. (Patty had not joined Steve yet – she was still in Washington, getting in a few more ski trips before heading to the beach in Melaque!)  We were anxious to see Steve!

The next day, January 31, we took the dinghy ashore through the almost non-existent surf to await Steve’s arrival.  We checked the palapas – he was not there yet – so we decided to walk up into town a ways and see what there was to see.  As we left the beach and headed down the dirt road toward town, we saw a taxi headed our way – it just had to be Steve; and it was!  After saying our hellos, we went back to the beach, settled in at one of the beachside restaurants, and had a delicious lunch and several “cold ones.”  Back on the boat after lunch, we got Steve settled in, and made  our plans for a mid-morning departure the next day for Bahia Tenacatita, a relatively short 30 mile hop further down Coastelegre. 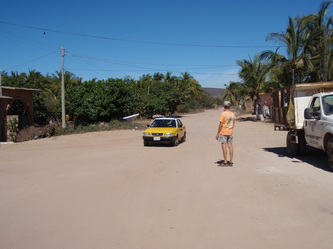 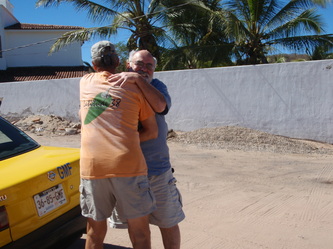 Breakfast the next morning was the “full meal deal” – pancakes, bacon, and fresh squeezed orange juice.  Here in Mexico, there is no such thing as orange juice from frozen concentrate – it’s all fresh, and delicious!  Juice oranges, or naranjas de jugo, are plentiful and inexpensive - $5 pesos (less than 50¢) per kilo (a little over 2 lbs.)!  Linda bought a handheld juicer (one orange at a time) in a small street shop in Puerto Vallarta, and it works great!  But, I digress . . . .

At 10:30 am we weighed anchor, and with Steve at the helm we headed out of Bahia Chemela bound for Tenacatita.  As is not unusual, winds were light so we motored.  About 2:00 pm, about 4 or 5 miles off the coast, both Linda and Steve saw a spectacular display by a couple of humpback whales who were quite near the boat – breaching multiple times, and jumping completely out of the water!  I don’t know where I was looking, but all I saw was the splash – which was also quite spectacular, and it was all Linda managed to capture in a photo (below) – also, we all saw one of the whales lying on its side, waving a fin in the air, as if to say goodbye!  Not long after the whales put on their show, we were also treated to a large pod of dolphins that came to play – what fun! 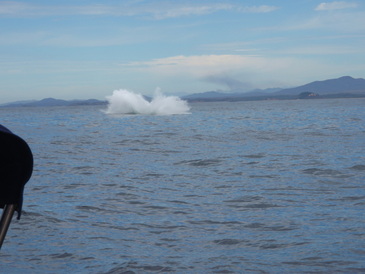 You should have seen the whale that made that splash!
By 4:30 pm we had the anchor down in the inner bay at Tenacatita, behind Punta Chubasco and off the mouth of small river that leads up an estuary, where people take their dinghies or hire pangas to go on what is known locally as the “jungle trip.”  There were quite a few boats in the anchorage, but we found a spot near the beach, not far from Hotel Blue Bay - an “all inclusive” resort hotel with a very loud and boisterous beachside variety show every night! (Enjoy!)  There was considerably more swell in Tenacatita than there had been in Chamela, so the sounds of surf breaking on the beach provided an interesting backdrop to an otherwise serene environment; except, of course, during Blue Ray show time!  Again, for those who wish to look it up on Goggle Earth, we were at 19° 17.6' N, 104° 49.3' W.

We spent four nights on the hook in Tenacatita.  During our time there we relaxed, took our dinghy on the “jungle trip” (where we saw lots of mangroves, a few birds, but no crocodiles), relaxed, ate at La Vena (the only beachside restaurant and bar near the anchorage), relaxed, took a panga ride across the bay with a group of other cruisers to the town of La Manzanilla (where we visited some interesting shops and galleries, had a great lunch on the beach, saw a huge crocodile in the local preserve, and got totally soaked in the waves and spray on the panga ride back to the anchorage), and relaxed.  We cooked steaks and arrachera on the grill, Linda kayaked around the anchorage, and Steve and I stayed up late listening to music in the cockpit and drinking Haitian rum.  Life is tough! 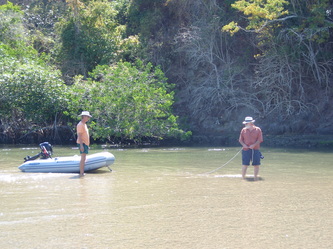 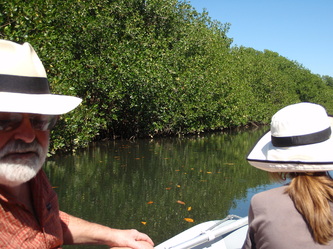 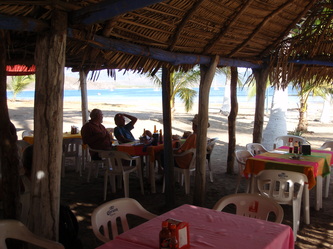 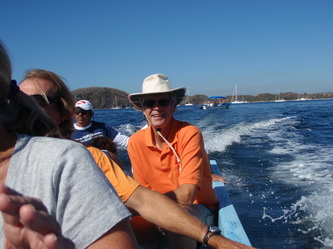 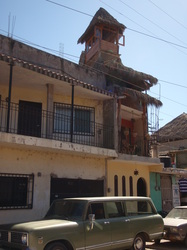 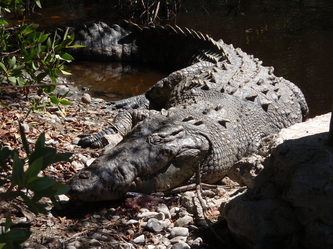 On Saturday, February 5, we decided it was time to on head on down to Barra.  This last leg of our trip was a short 15 miles: out of Bahia Tenacatita, past Cabeza de Navidad and Bahia Cuastecomate, past Melaque and across Bahia de Navidad to the entrance to Barra Lagoon, just beyond the luxurious Grand Bay Hotel & Marina and SE of the town of Barra de Navidad.  Entering the lagoon can be tricky because of a narrow, long and unmarked segment of the channel leading into the lagoon (with shallow sandbars on either side of the channel).  We used GPS waypoints from the indispensible Pacific Mexico Cruiser’s Guidebook, by Shawn Breeding & Heather Bansmer, and no trouble at all navigating the channel.  Anchoring once in the lagoon can also be tricky, with depths of only 10-13 feet or less in the unmarked anchoring field (again, with shallows all around).  And finding a spot with sufficient swing room can also be difficult; even though you anchor in not more than 10-13 feet of water, it is necessary to put out a significant amount of scope – usually 100 feet of chain, because of the relatively poor holding of the soft mud on the bottom, and the not infrequent strong winds (15-20 knots; occasionally up to 25 knots) that blow in the afternoons.  We found a spot near the head of the lagoon, in 12 -13 feet of water, where the holding seemed to be quite good (lat & lon of 19° 11.48' N, 104° 40.44' W). 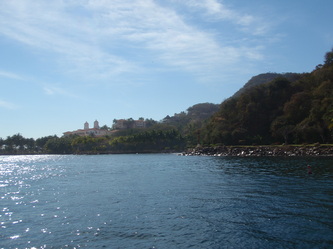 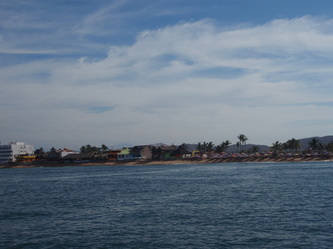 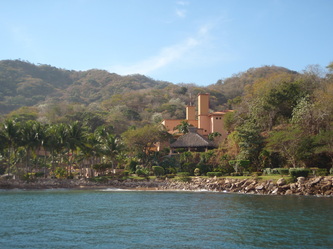 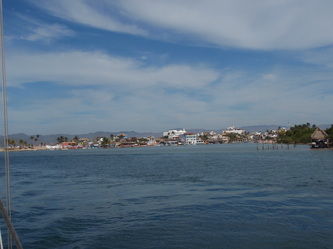 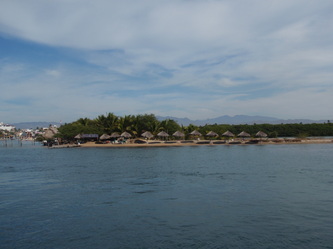 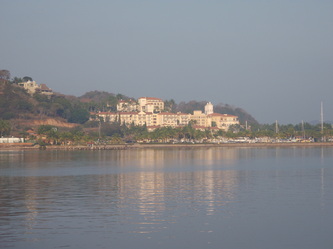 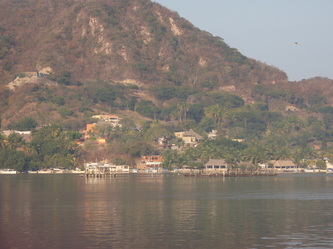 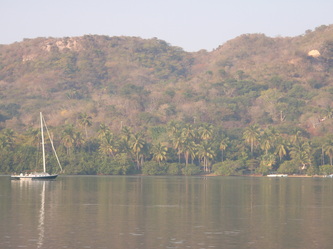 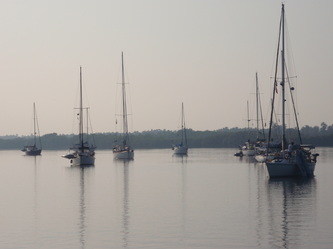 We hailed a water taxi on VHF Channel 23 - a 24-hour a day service for $25 pesos round trip to and from the lagoon to Barra de Navidad in a panga.  The three of went to town, had lunch at a beachfront restaurant (along with way too many two-for-one margaritas), and Steve caught a bus back to his hotel in Melaque.  It was a nice ending to an even nicer segment of our Mexican adventure with a great friend – thanks for the memories, Steve!  The next day we joined Steve in Melaque, with some of his friends, and some new friends we had met in Barra the day before, for a Super Bowl party and dinner at a local Mexican bar & grill – what fun; and, it was the first time we had sat and watched television since leaving the States! 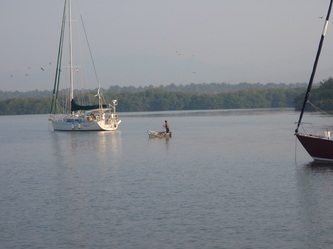 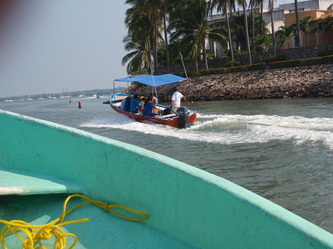 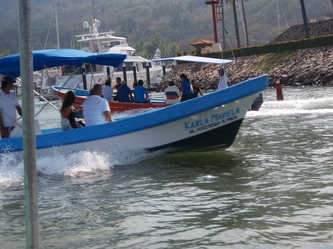 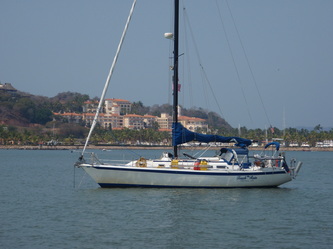 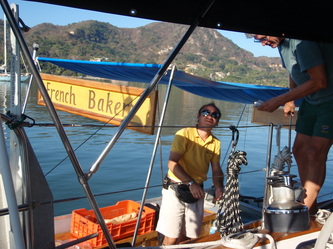 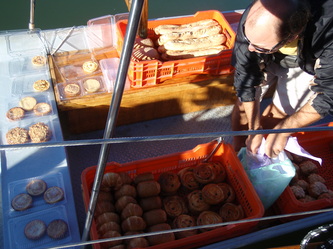