Our passage from La Cruz in Banderas Bay to Mazatlan was, for the most part, uneventful - that is not to say it was without any drama, but at least it was not the mechanical drama we experienced on our passage from Banderas Bay from Barra de Navidad in March (see the log entry below for that story).  I am happy to report everything worked just fine on the boat, and even though most of the trip was under power, we did find some decent sea breezes in the afternoons (8-10 knots) that allowed us to give the trusty old Yanmar a rest; but as the sun went down, so too did the winds.  The seas were also very gentle - the southwest swell was for the most part only about 2-3 feet at about 10-12 seconds; all in all it was a pleasant couple of days out on the ocean.  And we were treated to sightings of a few whales (quite a ways off, thankfully), a couple of pods of dolphins (that passed us astern but did not "come to play"), a good many bat rays (that swim just under the surface with the tips of their "wings" out of the water) and lots of big green sea turtles that just float along on the surface (occasionally with a sea bird sitting on the turtle's back).  Every now and again we would also see large fish jumping clear out of the water; and just before dusk, at 10-15 miles offshore, we saw large patches of the ocean surface literally afroth with schools of smaller fish right at the surface - and boobies, frigates and pelicans diving for dinner!  Seeing all this sea life is always a special treat and helps pass the time on or off watch! 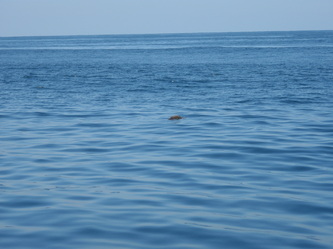 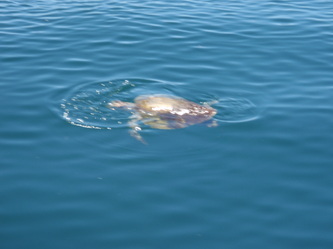 We decided to break this 175 mile passage into 2 legs - with a short 35 mile trip the first day, an overnight stop in Bahia Jaltemba, and an overnight 140 mile trip for the final leg.  When we left La Cruz, it was the Tuesday after Easter - but the Easter celebrations were far from over!  The Mexican Easter holiday is two weeks long, and Mexicans head to the beach and beach towns in droves.  La Cruz was no exception; and the festivities included a raucous fair with loud music and carnival rides that went on well past midnight, and loud fireworks and marching bands that started up as early as 5 am - I kid you not!  We were told this would go for the entire week after Easter!  So, when we entered Bahia Jaltemba - which is a large open bay with three small towns along the shore and semi-protected anchorages in front of two of the towns as well as an anchorage behind a small, uninhabited island in the middle of the bay - we "cruised" the anchorages in front of the towns and quickly decided to head for the island; the beaches were jam-packed, there were "banana boats", pangas, and jet skis  everywhere, and two large "party barge" catamarans cruising around in front of one of the towns.  When we anchored off a small sandy beach on the southeastern side of Isla la Pena, there were several Mexican families on the beach, but they soon left in water taxis, and we settled back in the cockpit with some cold cervezas for a quiet "Happy Hour" far from the hustle and bustle of the beach towns, and watched "clouds" of birds that nest on the island circling high overhead - boobies, frigates, pelicans, tropic birds, and even a few we had not seen before.  It was all very peaceful - but just as the sun was going down we were surprised to see one of the party barges, with loud music and jammed to the gunwales with boisterous revelers, coming from around the island and headed straight towards us- and the only viable anchorage at the island!  "Oh no!" we thought - "Please do not anchor here!"  Fortunately, they kept on going.  But no sooner had they passed astern, when the other party barge (with really awful live music, and just as many or more partiers) came at us from the other side of the island!  This time we were not as concerned about them dropping their hook as were about them running into us - they were really headed straight at us, and it didn't look like they were going to turn.  Even though we had our anchor light on, we started turning on our spreader lights, bow (steaming) light, and cockpit flood lights - just to ensure they could see us.  We were lit up like a small city, but they kept on coming, so I was about to head below to get the air horn when they finally bore away and passed no more than 25 yards off our beam - with flashes going off as many of the partiers were taking our picture!  As they fianlly passed astern, I went below and grabbed another beer! 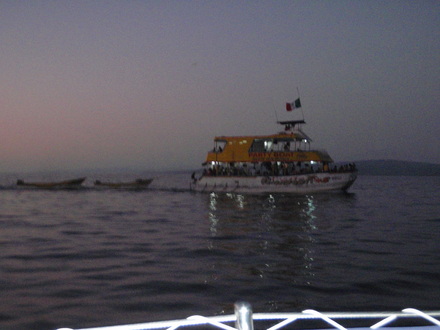 The first of two party barges to visit us at anchor behind Isla la Pena.
By 10 am the next morning we were underway again for Mazatlan, with calm seas and clear, sunny skies.  By early afternoon there was just enough wind to sail, so we turned off the engine and enjoyed the quiet of a leisurely sail for several hours, until the wind began to die off to less than 4 or 5 knots at sunset - that is really not enough to keep the boat moving fast enough to make our destination by afternoon of the next day - so we fired up the "iron main" again.  After our evening meal, we settled in to our 3 hours on, 3 hours off watch schedule, which seems to work well for us on these short, one overnight passages.  Everything went along just fine, with no shipping or other traffic to worry about, until just before 3 am (about 35 miles south of Mazatlan and 10-15 miles offshore) - when Linda called me up on deck to help her deal with a peculiar situation.  Although she could not see them visually (it was really dark, as the moon had not come up yet, and there were some clouds around) or on radar (they were small, fiberglass boats), there were flashlights waving and blinking at us from all around - we had come upon a "fleet" of panga fishermen.  We throttled way back, and even tried going around some of the lights - not knowing if the light we saw on the starboard side was at the end of a net strung to the boat flashing a light at us from the port side. (Getting a fishnet tangled in your prop is every sailor's nightmare!)  We soon gave up that tactic, as it was impossible to tell which lights might be associated with each other.  I took the helm and Linda went up on the foredeck with a strong light to look for net lines (even if we ran over one, it would be unlikely - although not impossible - to get it caught in our prop, which is in an apperature in our full keel, just ahead of our keel hung rudder).  We resumed our course - weaving back and forth to avoid the lights we saw - and proceeded at about 2-3 knots, signally back with our flashlight to indicate we saw them.  Not all of the boats flashed lights at us as we approached - or at all; some we merely heard as they raced by us (pangas usually have 50-75 hp outboards), or they would flash us after we had passed (at times less than 25 yards off!).  This was all very unnerving, but in what seemed like forever - but was really only about an hour - it was all behind us, with no damage to anyone or anything - at least not that we are aware of!

As we got to within about 4 or 5 miles of Mazatlan, it was daylight and easy to see the shrimp fishermen working their pots.  It was fun to see the familar Mazatlan skyline and waterfront, and know that soon we would be in Marina Mazatlan catching up with some old friends we expected see there, and getting ready for our trip back across to the Baja and up into the Sea of Cortez to do some snorkeling, kayaking, fishing and exploring in some of the beautiful and remote anchorages up around Loreto, Puerto Econdido and Santa Rosalia.  Life is  good! 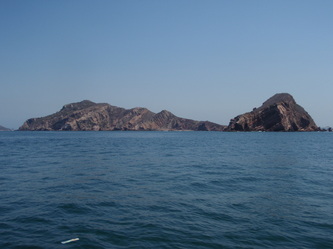 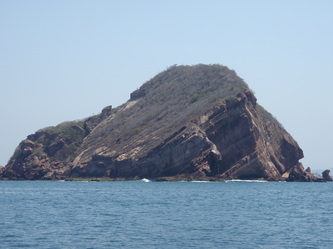